In addition, according to the measurement principle, it can be divided into the following categories:

5. Optical principle: laser type and photoelectric type are instruments belonging to this kind of principle.

6. Principles of atomic physics: nuclear magnetic resonance and nuclear radiation are instruments belonging to such principles

According to the most popular and extensive classification at present, this paper expounds the principle, characteristics, application overview and the exertion of various flow meters at home and abroad:

The secondary devices are various mechanical, electronic and electromechanical integrated differential pressure gauges, differential pressure transmitters and flow display instruments. It has developed into a large class of instruments with high degree of three Standardization (serialization, generalization and standardization) and complex types and specifications. It can measure not only flow parameters, but also other parameters (such as pressure, material level, density, etc.). 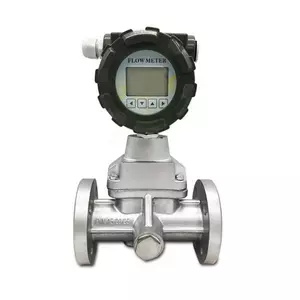 Test pieces can be divided into two categories according to their degree of Standardization: standard and non-standard.

The so-called standard test piece is designed, manufactured, installed and used according to the standard documents, and its flow value can be determined and the measurement error can be estimated without real flow calibration.

Non standard test pieces are those with poor maturity and have not been listed in international standards. Differential pressure flowmeter is one of the most widely used flowmeters, and its usage ranks first in all kinds of flow instruments. Due to the advent of various new flowmeters, the percentage of its use has gradually decreased, but it is still the most important type of flowmeter at present.

The fluid volume flow formula of differential pressure flowmeter is:

A -- flow coefficient, which is related to the channel size, pressure taking method and flow rate

A -- opening area of orifice plate

(1) Orifice plate flowmeter, which is most widely used, has firm structure, stable and reliable performance and long service life;

(2) It has a wide range of applications, and so far there is no type of flowmeter that can be compared with it;

(3) The detection parts, transmitters and display instruments are produced by different manufacturers, which is convenient for large-scale economic production.

(1) The measurement accuracy is generally low;

Note: a new product: the balance flowmeter developed by NASA is introduced. The measurement accuracy of this flowmeter is 5-10 times that of the traditional throttling device, and the permanent pressure loss is 1 / 3. The pressure recovery is twice as fast, and the minimum straight pipe section can be as small as 1.5D. It is easy to install and use, greatly reducing the capacity consumption of fluid operation.

8. In general, the velocity of fluid in the pipe is the maximum at (pipe centerline) and equal to zero at (pipe wall).

9. If (Reynolds number) is the same, the motion of the fluid is similar.

10. When the fluid filled the pipe flows through the throttling device, the flow beam will occur (local contraction) at (necking), so that (flow rate) increases and (static pressure) decreases.

15. The orifice flowmeter is used to measure the steam flow. When the steam density is 4.0kg/m3 in design and 3kg / m3 in actual operation, the actual indicated flow is (0.866) times of the design flow.

18. In order to make the flow coefficient of orifice flowmeter α The Reynolds number of the fluid shall be greater than (the limit Reynolds number) when it tends to the fixed value.

Rotameter, also known as rotameter, metal rotameter and Chengfeng glass rotameter, is a kind of variable area flowmeter. In a vertical conical tube expanded from bottom to top, the gravity of the float with circular cross-section is borne by hydrodynamic force, so that the float can rise and fall freely in the conical tube.

Rotameter is the most widely used type of flowmeter after differential pressure flowmeter, especially in small and micro flow.

(1) The glass cone tube rotameter has the advantages of simple structure and convenient use. Its disadvantage is low pressure resistance and high risk of glass tube fragility;