How to troubleshoot Rosemount transmitter and temperature sensor connection issues?

If the Rosemount transmitter is directly connected with a thermocouple or resistance temperature sensor, it may cause some problems at the input end of the host system of the instrument, thereby affecting the measurement effect of the transmitter.

To solve this problem, we can add a temperature transmitter near the sensor, such as:

1. Smart transmitters can collect and send data such as diagnosis and calibration.

2. Multiple transmitters can send data back through a single cable, and can also collect data from multiple sensors.

3. These smart transmitters can run for many years because they have built-in power modules and do not require other maintenance. There is an option to use a wireless HART protocol transmitter, which does not require the use of control system inputs or wiring.

4. No cables or input cards are required.

5. Using 4-20 mA current of digital protocols such as FOUNDATION fieldbus or HART, it can send a long distance and provide a relatively stable signal.

6. Most transmitters are compatible with a variety of resistance temperature detectors and thermocouples, so the sensor can be replaced when needed. 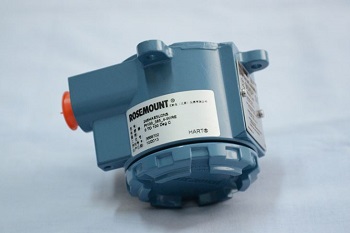 A temperature transmitter is an instrument that converts a temperature variable into a transmittable, standardized output signal. Mainly used for the measurement and control of industrial process temperature parameters.

Temperature transmitters include electric unit combination instrument series and miniaturized modular, multi-functional and intelligent types. The former do not have sensors, and the latter two types of transmitters can be easily combined with thermocouples or thermal resistances to form transmitters with sensors.

The power supply to the Rosemount Temperature Transmitter must not have spikes that could easily damage the transmitter. The calibration of the transmitter should be carried out 5 minutes after power-on, and pay attention to the ambient temperature at that time. When measuring high temperature (>>100°C), the sensor cavity and the junction box should be separated by filling material to prevent the junction box from being too high to burn out the transmitter. When using the sensor in the case of serious interference, the housing should be firmly grounded to avoid interference, the power supply and signal output should be transmitted by Ф10 shielded cable, and the crimping nut should be tightened to ensure air tightness. Only the RWB type temperature transmitter has 0~10mA output, which is a three-wire system. When it is below 5% of the range value, the non-linearity is caused by the turn-off characteristic of the triode. The temperature transmitter should be calibrated every 6 months. If the DWB cannot perform linear correction due to circuit limitations, it is best to select the range according to the instructions to ensure its linearity.